What is Gamma Knife?

The Gamma Knife is an advanced brain surgery device that permits outpatient brain surgery with no incision, minimal discomfort, and a brief recovery. Developed in Sweden in the 1950s, the Gamma Knife has been in use in the United States for decades, providing patients with a treatment option for brain disorders that were once only treatable by open skull surgery. Over a million patients have been treated with Gamma Knife surgery. In fact, Gamma Knife is the only radiation therapy system specifically licensed by the FDA for irradiating brain metastases. With unsurpassed and proven clinical outcomes, the Gamma Knife is the gold standard in cranial radiosurgery.
In Gamma Knife radiosurgery, a focused dose of radiation is used to stop and/or reduce the growth of abnormal tissue. The Gamma Knife radiation distorts the DNA mapping of the cells and renders them unable to divide. The 192 beams of radiation are focused on the abnormal tissue area, with the area of intersection conforming to the size and shape of the target. Each of the individual beams provides a relatively small, harmless dose of radiation. Only at the point where the narrow beams converge is the radiation at its most powerful, therefore preventing injury to surrounding healthy tissue. Gamma Knife treatments take place in a single day without an incision, allowing patients to quickly resume their normal activities.
Equipped with the most advanced radiosurgical device available, the Leksell Gamma Knife® Perfexion™, the Southern California Regional Gamma Knife Center at San Antonio Regional Hospital takes Gamma Knife radiosurgery one step further.
Leksell Gamma Knife Perfexion delivers the most efficient and precise radiosurgery treatment to date. With an expanded treatment area and enhanced accuracy, this sophisticated system allows clinicians to treat tumors that were unreachable using previous technology.

Gamma Knife Is the Gold Standard in Minimally Invasive Neurosurgery

Backed by decades of clinical application in the U.S. with unsurpassed outcomes, Gamma Knife is recognized as the gold standard in minimally invasive neurosurgery. The new Gamma Knife Perfexion takes this gold standard to platinum. 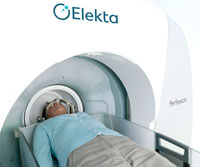 The Gamma Knife Perfexion administers a single dose of radiation to stop and/or reduce the growth of abnormal tissue by destroying the DNA mapping of the cells, which renders them unable to divide. One-hundred-and-ninety-two precise gamma ray beams are focused on the abnormal tissue area with the area of intersection conforming to the size and shape of the tumor.
The Gamma Knife Perfexion delivers a powerful dose of radiation to the targeted tumor while preventing injury to surrounding tissue. The Gamma Knife is utilized most frequently in treating brain metastases, where it is used by itself or incorporated with surgery, radiation therapy, or chemotherapy. For inoperable tumors or for those patients who may not tolerate open skull surgery, the Gamma Knife may offer an effective treatment. 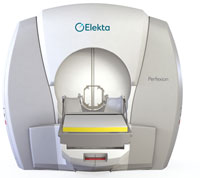 Perfexion’s anatomical reach has been expanded to treat the brain, skull base, and cervical spine, which allows treatment of difficult to reach tumors that were not previously treatable by earlier Gamma Knife and competing technologies. Perfexion can safely and effectively irradiate multiple lesions in a single treatment session while other modalities may require multiple treatment sessions.
The Gamma Knife Perfexion design provides unmatched ability for sculpting the treatment plan with high precision accuracy allowing treatment of tumors near vital parts of the body.
Radiosurgery with the new Gamma Knife Perfexion™ remains an outpatient procedure, free of the risks of invasive brain surgery. Following Gamma Knife treatment, patients can immediately return to a preoperative lifestyle without any need for intensive care or extended hospitalization.