The Story of Frances Mary Paul

It did not take Frances Mary Paul long to prove her mettle after she arrived in Los Angeles in February 1887. Traveling with a sick husband and two small children from Harrisburg, Pennsylvania, the scene that greeted them was dismal at best. Rain, long missing from the California weather scene, was falling in torrents and turned the streets of Los Angeles muddy beyond description. The boardinghouse where they initially stayed had no furnace, and one was lucky to have a tiny fireplace and a handful of coal to stoke it.
After a month in these dreary surroundings, the Pauls struck out for a hotel in Ontario that they thought sounded better than their present accommodations. As fate would have it, however, their journey overtook a letter advising them that the Ontario hotel was full. Upon arriving in Ontario to find no vacancies, they spent another makeshift, miserable night until they found a house to rent in an orange grove. The weather changed at this time and the weary easterners were thoroughly enchanted by the Shangri-La created by the annual transformation of the inland valley citrus groves.
When the Pauls arrived in Ontario, the "Model Colony" was five years old. The Santa Fe Railroad was not built and a town where Upland now flourishes had not been thought of. Life was primitive—no electricity, no telephones, no ice, no trolley, no domestic help, and no hospital. However, the climate proved to be the perfect antidote for Colonel James Paul, who was suffering with tuberculosis and given not long to live by the doctors back east.

Colonel Paul seemed to make a remarkable recovery, and it was not long before he became active in the local citrus and banking industries. He served as founding President of the Upland Citrus Association and continued in that role for 16 years, as well as serving on the Board of Directors for the California Fruit Exchange.

In 1888, Colonel Paul was made President of the Commercial Bank of Upland, the town's principal financial institution. He held this position for the next 16 years. He also became involved with local water issues, serving on the Advisory Board of the San Antonio Water Company. In addition to serving his community, he was a director for the Pan-American Petroleum Company.

Colonel Paul, along with Charles Harwood, another long-time Upland resident, invested in the Mexican Petroleum Company which controlled 400,000 acres near Tampico. Colonel Paul had been a life-long Republican and served as a state delegate to the 1904 Republican convention in Philadelphia when Theodore Roosevelt was nominated, and once again at the 1912 convention in Chicago when William Howard Taft was nominated.
While her husband busied himself with local business matters, Frances Mary set about establishing a comfortable home and lifestyle for her family. Never having had to learn the delights of domestic chores, Mrs. Paul soon learned how to do "housework," everything from baking bread to harnessing the family pony, "Pet." The Pauls built their first house, a Victorian, located on property on East 23rd Street.
It was some years later that a serious illness necessitated an operation for Frances Mary. Travel to Los Angeles was required because of the lack of medical facilities in Upland. Having a natural sympathy for the sick, Mrs. Paul developed a desire to see an adequate hospital in her community. Another event, involving a beloved family employee, also had a profound effect in spurring Mrs. Paul onward with her hospital plans. During a total eclipse of the sun, Frances Mary's grove foreman, Mr. Hutton, was trying to calm a team of unsettled horses when they bolted and dragged the wagon over him. With no emergency medical services available, the accident proved fatal to the loyal employee. This event made Mrs. Paul even more determined to provide hospital care for the local community. Her plans took shape as a memorial to her husband who died at home at the age of 71 in April, 1911.

Upland's first hospital, The San Antonio Hospital, was a small facility of 18 beds with a medical staff of five physicians. It was built with funds received from community stock sales and opened on the corner of Arrow Highway and San Antonio Avenue in 1907, one year after Upland was incorporated as a city. By 1922, the population of the hospital's service area had more than doubled and this growth produced the need for a much larger hospital. 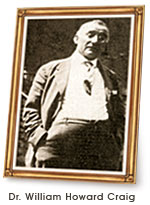 Understanding that need, Doctor William Howard Craig, a long-time resident and physician, solicited the aid of his friend and patient, Frances Mary Paul, who Frances Mary had demonstrated a long-standing concern regarding the medical needs of her community. She was an enthusiastic supporter of the dream that a larger medical facility could be built in Upland.
Donating $75,000 toward construction of a new, larger hospital in memory of her husband, Frances Mary became the first benefactor of the existing San Antonio Hospital. This gift was soon augmented by other donations, including gifts of $10,000 each from Mrs. Paul's two children, Earl Paul and Alice Paul Harwood.
On April 30, 1920, the initial bylaws of the Paul Memorial Hospital were adopted. However, Mrs. Paul worried that the use of her family name in the corporation might discourage others from donating. So, the bylaws were amended and the name of the first hospital, San Antonio, was used in addition to adding the word "community" to convey its nonprofit charitable structure.

San Antonio Community Hospital was dedicated on Wednesday, July 30, 1924, and ready for patients the next day. This new hospital, "commodiously and scientifically constructed," according to a news article in the Upland News, had 35 rooms with a capacity for 50 patients. The completely equipped maternity wing included a nursery large enough to care for 20 babies. The total cost for this new facility, located on East San Bernardino Road, was $173,107.10.
Although Mrs. Paul died in January, 1923 before construction had begun, her legacy of generosity and community service was carried on by her children. In her mother's memory, Alice Paul Harwood turned the first spade of dirt during groundbreaking ceremonies in April, 1923. Alice played a crucial role in organizing the hospital's Women's Auxiliary, whose charitable works over the years have resulted in major monetary contributions to the hospital.

The Auxiliary's major focus, from the beginning, was to establish the Free Bed Fund and the Sick Baby Fund. Earl Paul was elected president of the Hospital Association at the April, 1925 meeting, and moved into the position of treasurer, which he held for the next 25 years. Both Alice and Earl worked tirelessly to support their family's legacy of quality medical care.
In 1947, newspaper columnist and local historian Una Winter wrote a short article for the Upland News summarizing the founding of San Antonio Regional Hospital. Mrs. Winter wrote, "All of us who live in the shadow of this hospital—and of the present and future generations—owe Mrs. Paul our heartfelt thanks: she thought of us and our needs and provided the inspiration, backed by her generous gift, to build a hospital that is rated as one of the best." In a 1969 history of San Antonio Regional Hospital, it is written that the hospital's story is one of "cooperation, inscribed upon by workers with the desire to help and the will to succeed." These qualities—a desire to help and the will to succeed—certainly summarized the efforts of the entire Paul family, but most especially Frances Mary Paul. This warm, caring human being was committed to her family and to her community.
Since that time, San Antonio Regional Hospital has grown and changed with the community—relying upon benefactors like Dr. Craig and Mrs. Paul to institute change and motivate the community to help provide for that change.

In 1984, the Frances Mary Paul Circle was formed to recognize individuals who share her vision and are committed to perpetuating her legacy of generosity and community service by making cumulative gifts of $10,000 or more to the San Antonio Hospital Foundation. Membership in the Frances Mary Paul Circle is one of the highest honors a donor can receive at San Antonio Regional Hospital.